It appears that the family had intended to migrate together but was delayed by the death of John Kelleher in 1880. It was said this resulted in older brothers, who have not been identified, arriving first and then the rest of the family following.

The family name was almost extinguished in the first generation because of the preponderance of females and one of the two males did not marry. The broad disposition of the family, as can be gleaned from public records, is as follows.

After Daniel Kelleher left school he worked for the Ipswich Advocate as a Court reporter. He then joined in 1896 the Queensland Northern Railway as a porter. He became a station master at Marathon, the western terminus of the Great Northern Railway. He married Mary Catherine Halligan in Townsville in 1903. She was the daughter of policeman Patrick Halligan and Catherine O’Leary. Patrick was born in Swineford, County Mayo, around 1840. Mary O’Leary was born around 1847 in Killarney, County Kerry and appears to have travelled to Queensland, third class, on the Empress of the Seas in 1867, aged 20 years. 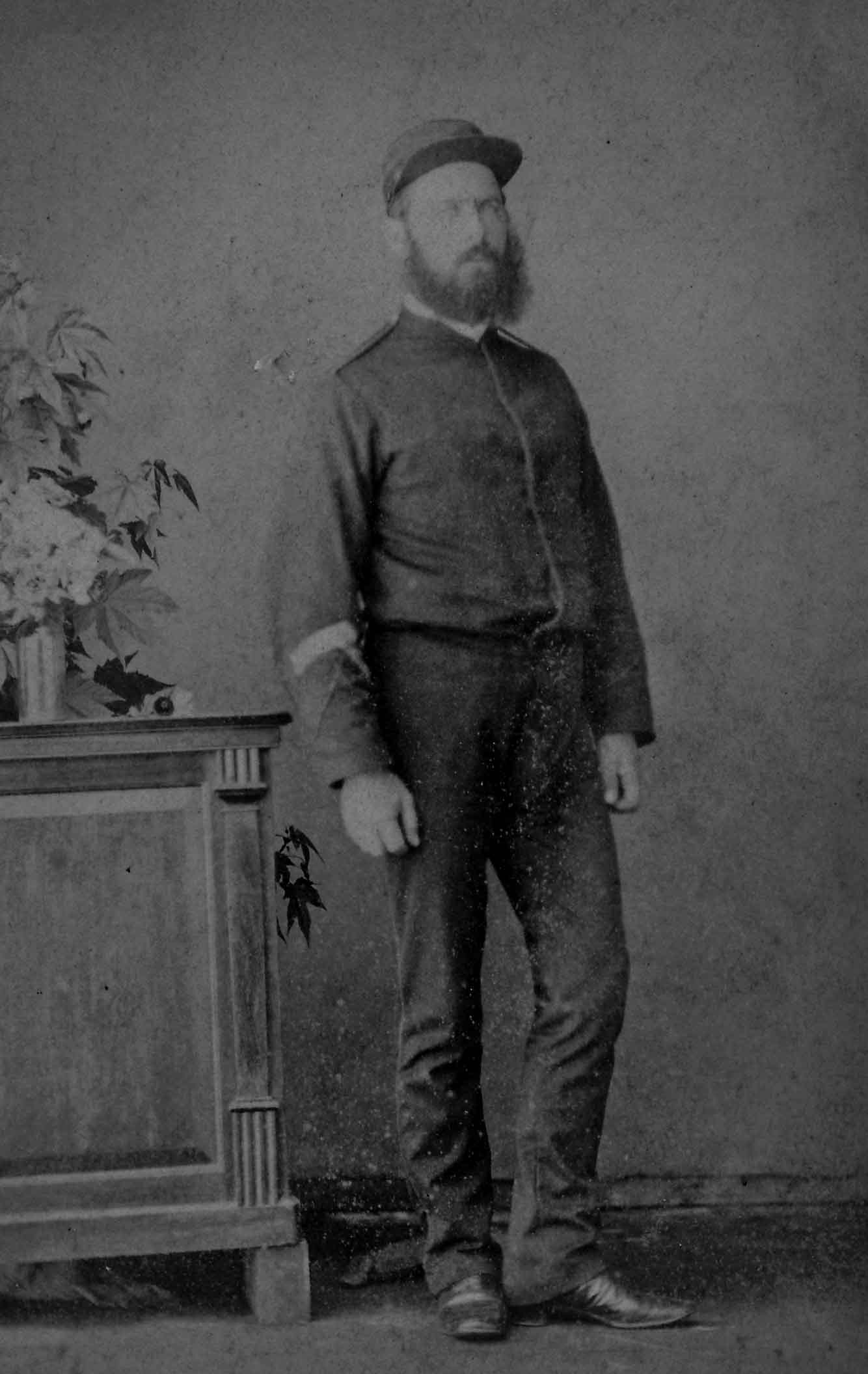 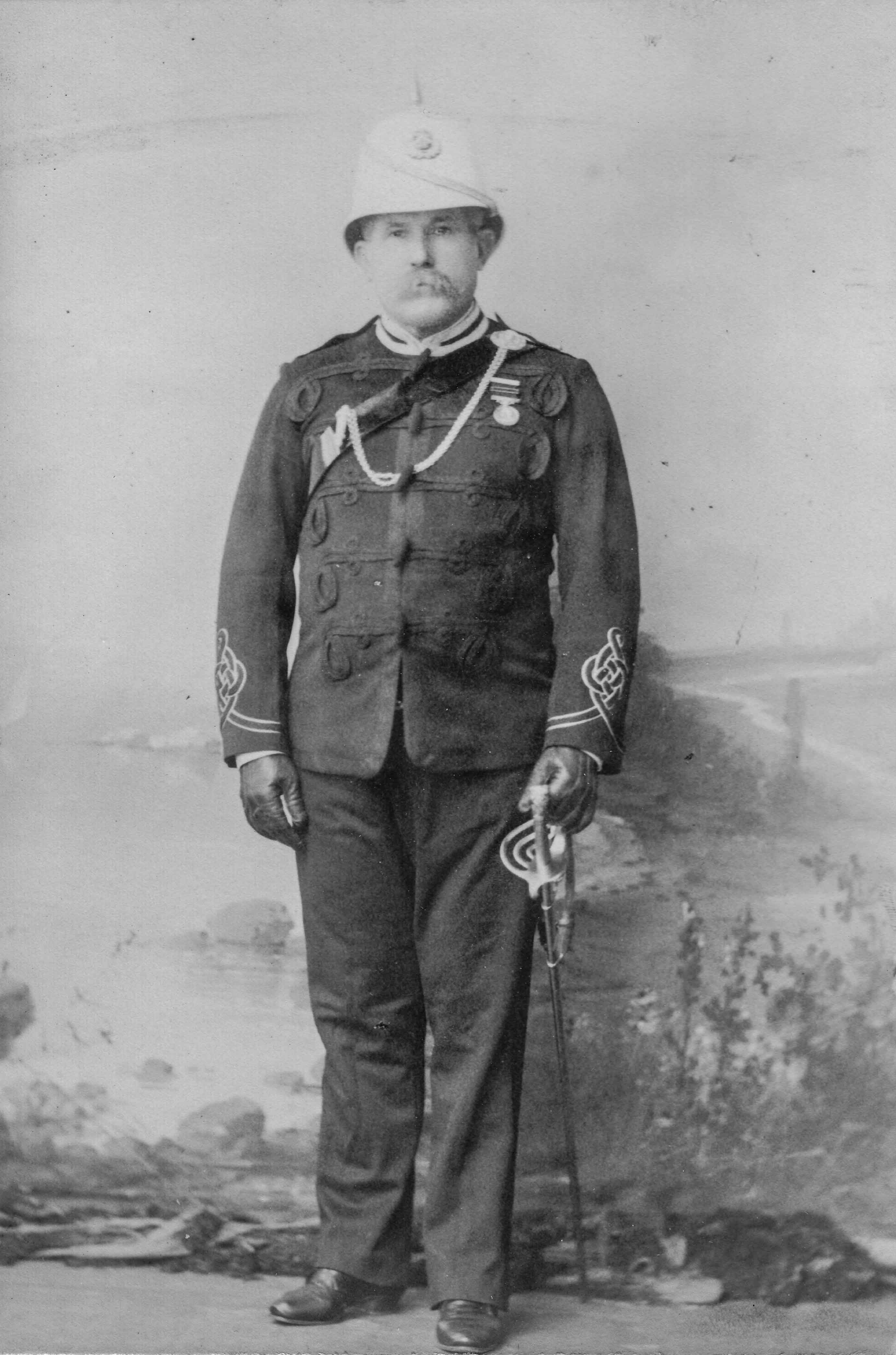 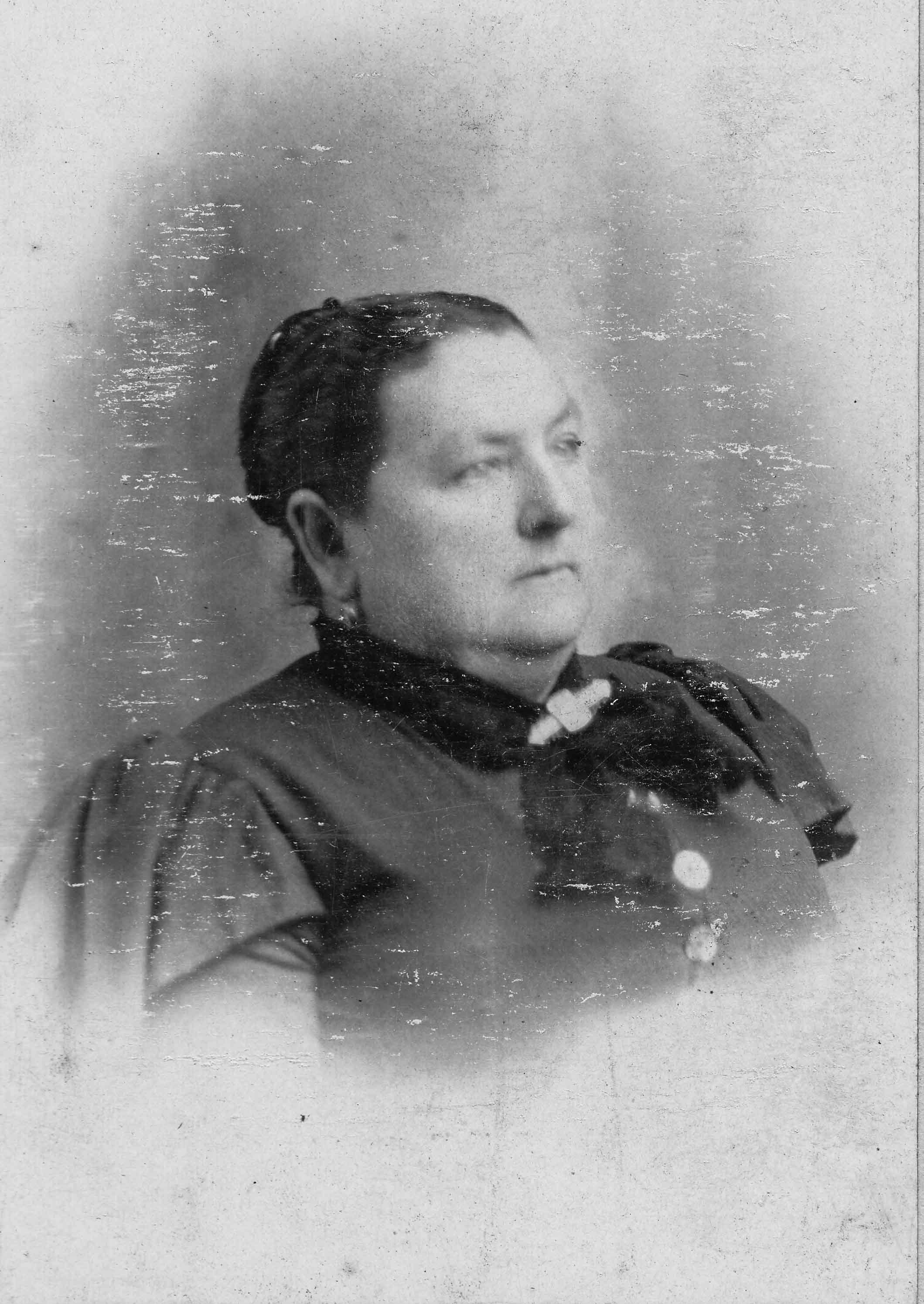 The Halligan album has many unidentified photos but this is highly likely to be Patrick Aloysius Halligan as a trooper.

Most likely to be Catherine Halligan nee O’Leary, wife of Patrick.

Patrick Halligan joined the Irish Constabulary (now the Royal Ulster constabulary) on 18 August 1859 at the aged 19. He resigned in 1865, migrating to Queensland and joining the Queensland police force on 12 June 1865. The Queensland police force had been separated from the NSW force by Act of Parliament in May 1860 but did not commence operations as an entity until 1 January 1864, resulting in his receiving a registration number of 39.

Their uniform comprised dark green trousers with red-striped sides, dark green shirts and a black cap with a red band. Patrick was appointed as a constable on 28 June 1865 and was stationed in Rockhampton, undertaking general foot and mounted work . He was described as being 5 foot 8 inches tall and having grey eyes and brown hair. He was made a senior constable on 1 September 1869. He moved to Cairns where he was said to have bought land at the first auction. He died in 1924. 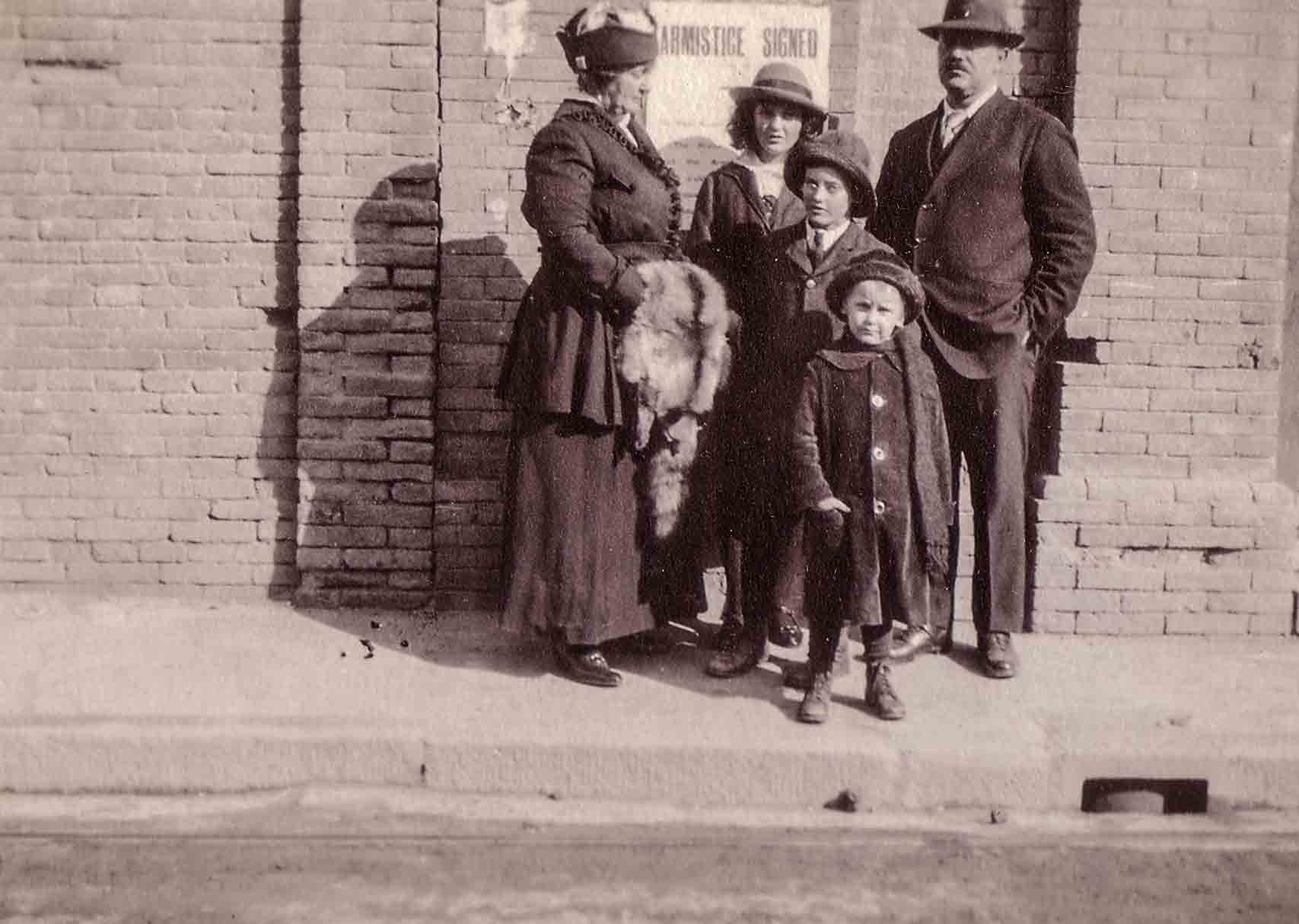 Daniel Kelleher was one of a number of Queenslanders who worked on the British Imperial Railway in China. He was initially stationed in Manchuria and was later in the powerful position of Station Master at Peking port of Tientsin. Mary Kelleher nee Halligan, Daniel Kelleher, Daniel Junior, Jack and Peggy.

Kelleher family. First photo appears to be taken around 1915 in front of their quarters in the British concession in Tientsin. The second photo was likely to have taken in 1918 given the Armistice billboard in the background. Same people in the photo but a little older.

It is probably best for Daniel Kelleher to tell part of his story in his own words. He wrote a long article for The Telegraph which was published on Saturday 2 April 1927. He said

“ I lived In China tor 15 years, and held the position of traffic superintendent on the railway which runs from Peking to Mukden during the whole of that time. This railway connects with the Chinese Eastern and Trans Siberian lines, and, before the war, the journey from Peking to London was done in 11 days.

The first five years I lived in Newchwang, the northern terminus of the line. I was stationed there during the Russo Japanese war, and was only 40 miles as the crow flies from the ground where the battle of Mukden was fought. The next ten years I was stationed at Tientsin, which is the port for the capital Peking, 87 miles inland.

During my stay at Tientsin, I was in the midst of three revolutions, and I saw a great deal of Chinese soldiery. My duties were to provide cars and arrange trains for the movement of troops, and at the same time endeavour to run passenger and goods trains for the public with the few carriages and wagons that the military did not require.”

He made a number of comments about Chinese justice and stated the following.

“In 1911 the Chinese troops looted and then burnt the native city of Tientsin. Twenty three Chinese civilians, who had picked out a few boots and clothing from the fire, were caught by the Chinese police, and ordered to be shot next day. A strong, healthy boy of 15 was amongst them. His cries for his mother attracted the attention of some foreigners who went to see the prisoners in the cage a few hours before the execution. They appealed to the chief of police to save the boy. His reply was that he had 23 heads to return, and if he let the boy go his own head might be wanted to make up the number. However, after some more talk the chief got an idea. There was a man in a goal not far away. He gave orders for this unfortunate fellow to be brought along: he was placed in the cage and the young chap was given ills freedom. Thus 23 men were shot. These men got no trial. I wonder how some of the people in this country who talk “hands off China” would like to live under these laws.”

Daniel and Catherine had four children. Margaret, in 1905, who was likely to have been born in China or Mongolia. She died an untimely death in 1945 with a burst appendix. Jack was in Mongolia in 1906. Joseph was born in China in 1908 and died a couple of years later. Daniel was born in Tienstin in 1913.

He was Superintendent of the line which ran from Peking to Mukden, which linked the Chinese Eastern and Trans-Siberian lines.

He was later to write in the Brisbane Telegraph that I was in the midst of three revolutions, and saw a great deal of Chinese soldiery. My duties were to provide cars and arrange trains for the movement of troops, and at the same time to run passenger and goods trains for the public with the few carriages and wagons that the military did not require . 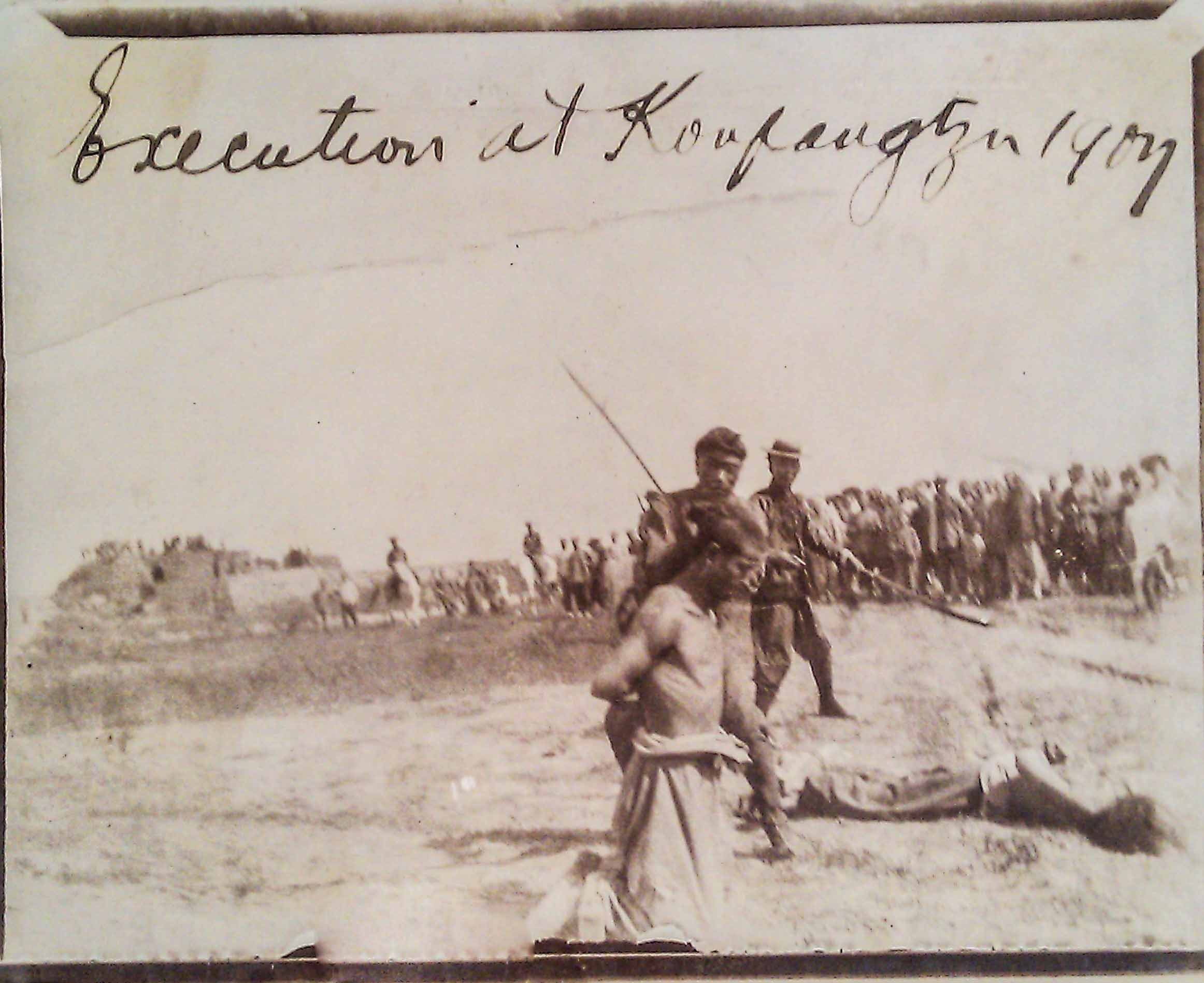 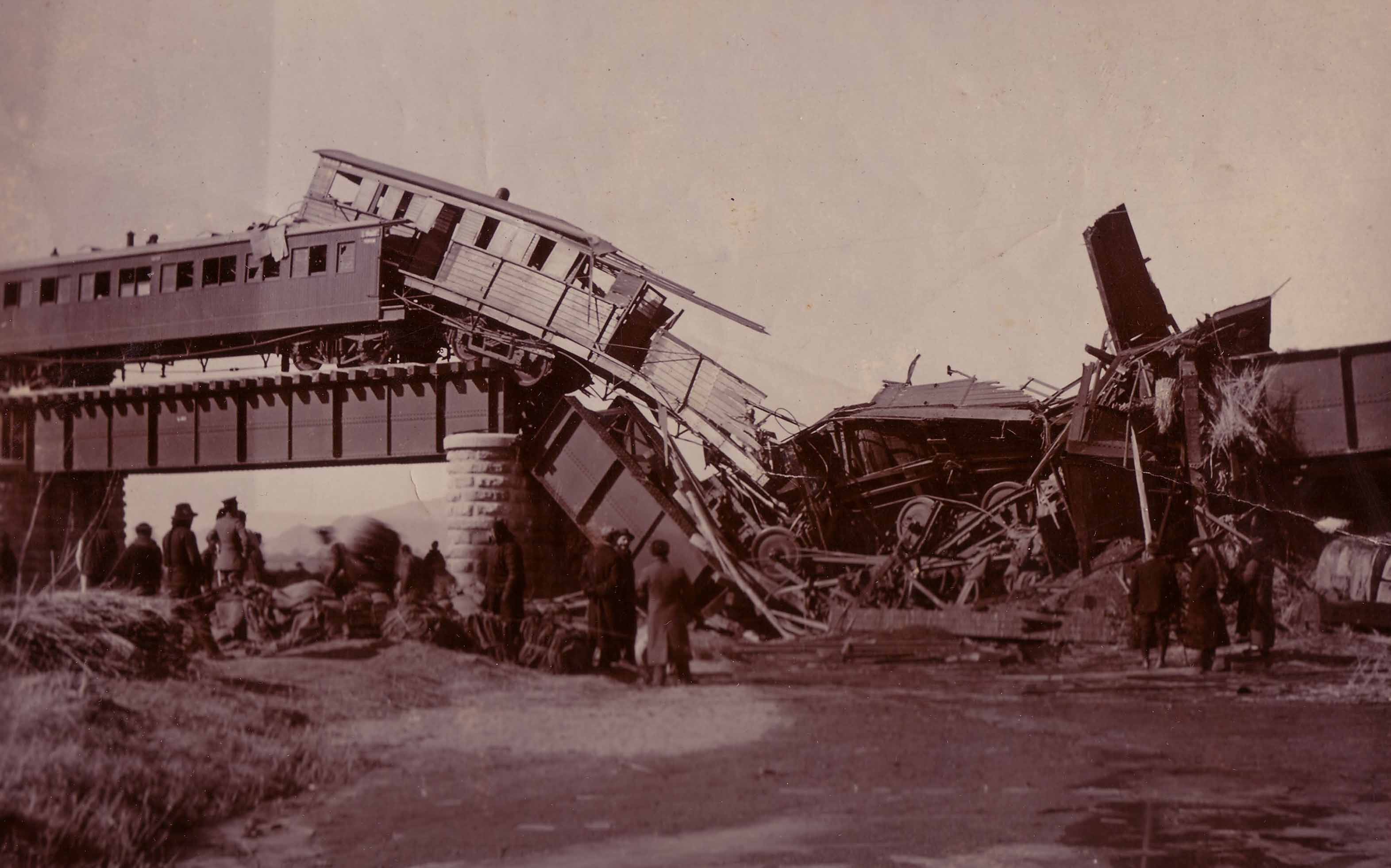 Daniel Kelleher and family lived in turbulent times in China with justice, where it could be found, being brutal and quick. These executions took place in 1907 and such beheadings were not uncommon and sometimes quite arbitrary.

Dynamited train hit in the middle carriages in the Shanhaiguan District. The dead bodies lie covered up with matting. Apparently wrecked by robbers who thought there was a large quantity of money aboard. However, it was only a goods train with a few passengers travelling.

Daniel Kelleher wearing the Order of Officer d’Academie, the Chinese Government Sixth Class of the Order of the Striped Tiger and a second class silver medal by the Chinese Ministry of War.

The station master of Tientsin was an important position as the various concessions vied for priority to have their armaments and goods shipped.

He met many influential men such as Lord Kitchener when he visited “North China” and George Ernest Morrison, perhaps one of the most influential Australian war correspondents in history and a man who influenced the course of events in China. 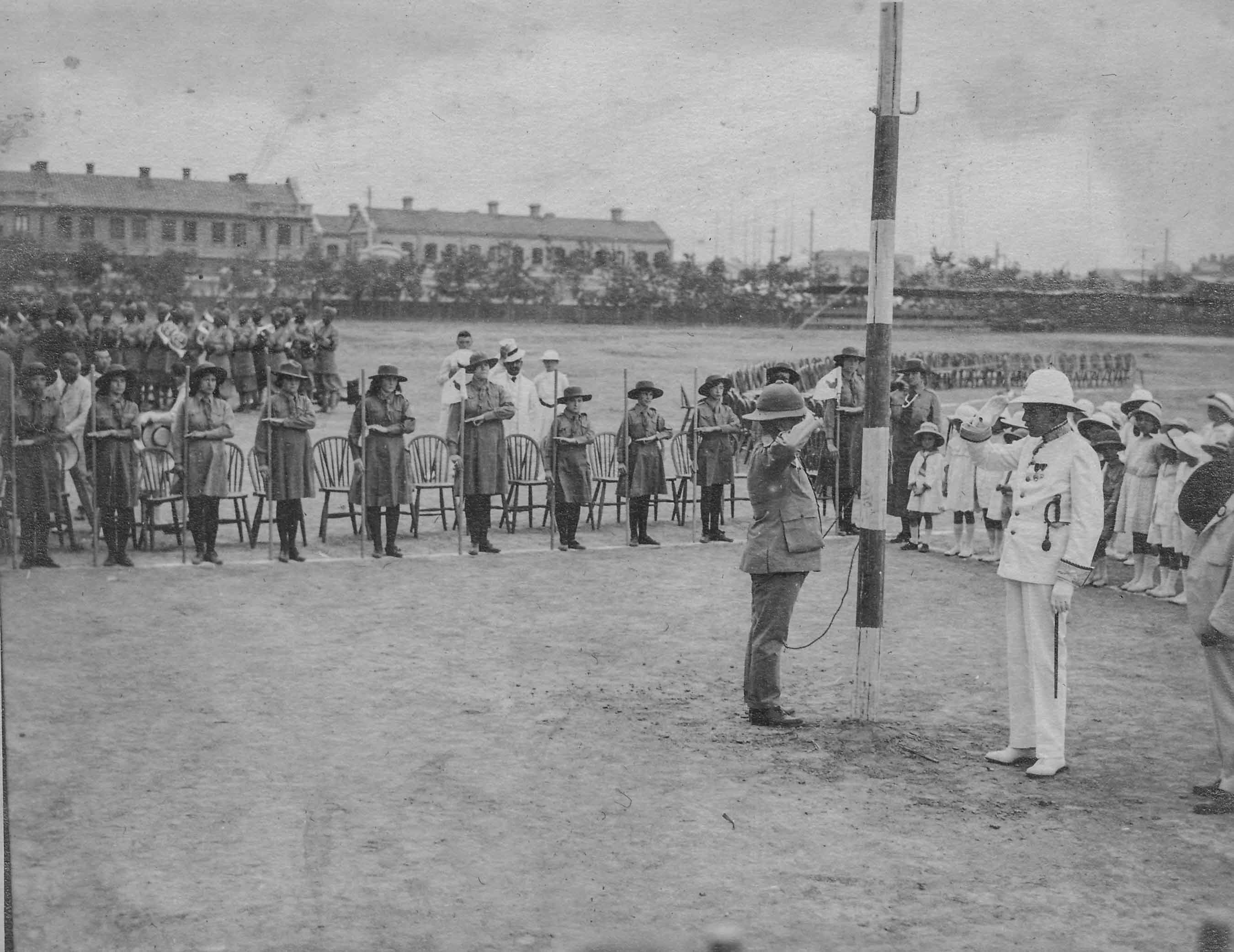 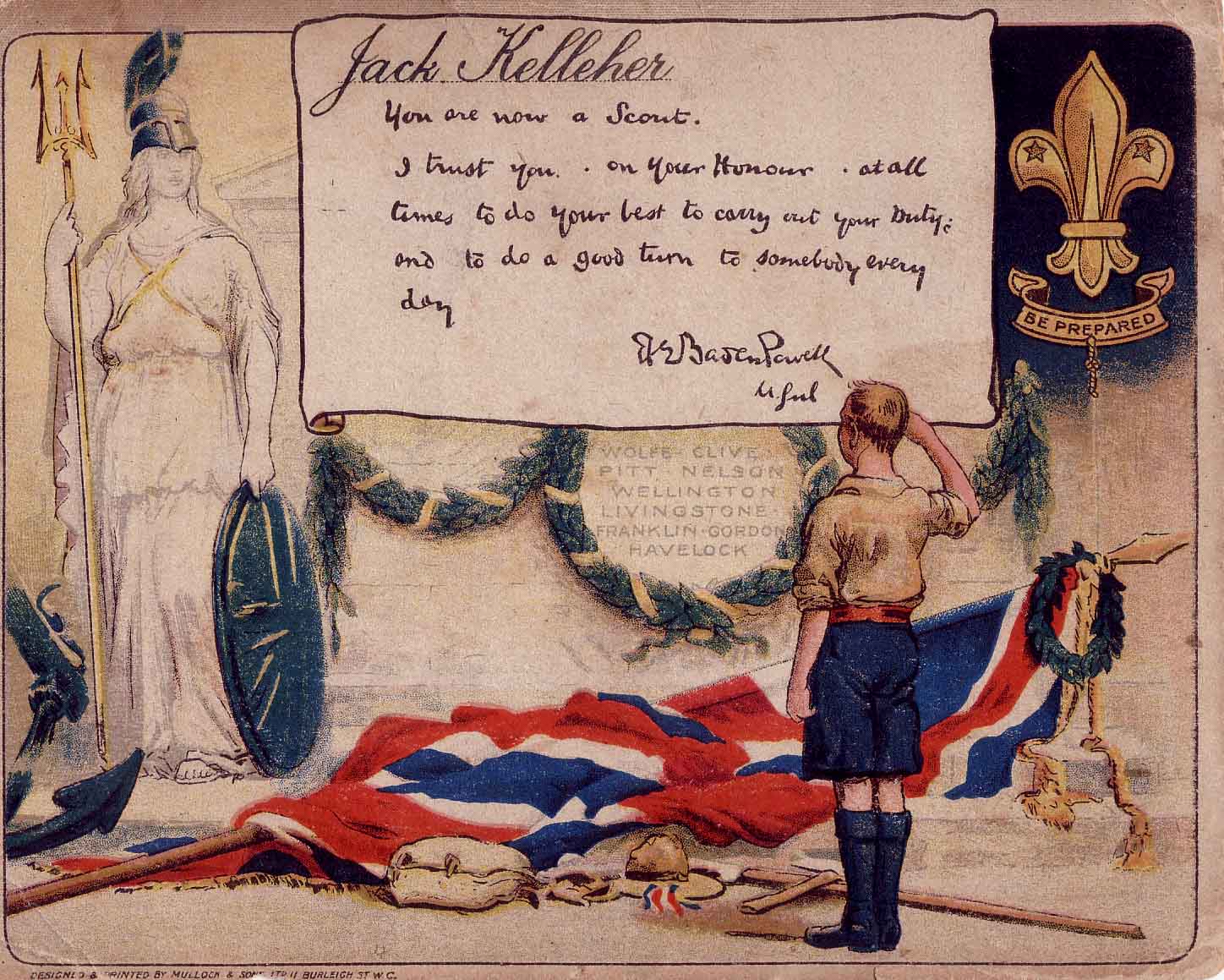 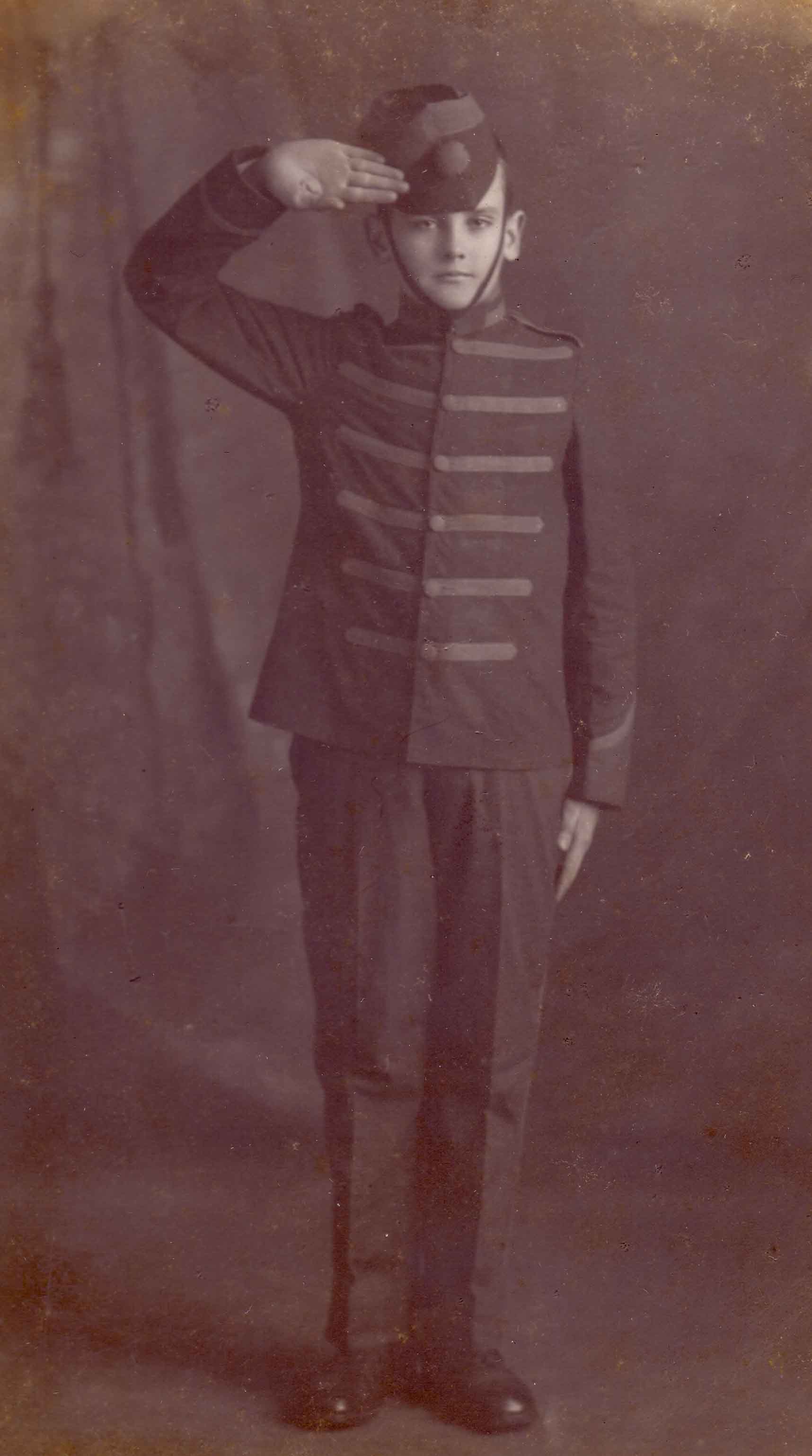 Girl Guides in China within the British concession. Peggy Kelleher 5th from left. Within the concession, it must have been like growing up in England.

When Daniel Kelleher returned to Australia 1919 he acted as an agent for the sale of merchandise and insurance after opening an office at the Telegraph newspaper’s chambers in Brisbane. He helped Jack on the farm for a few years before moving to Mount Isa where he was employed with Mount Isa mines. He was shown as a night watchman when he died on 4 January 1932, aged 58 and lies buried in Mount Isa. 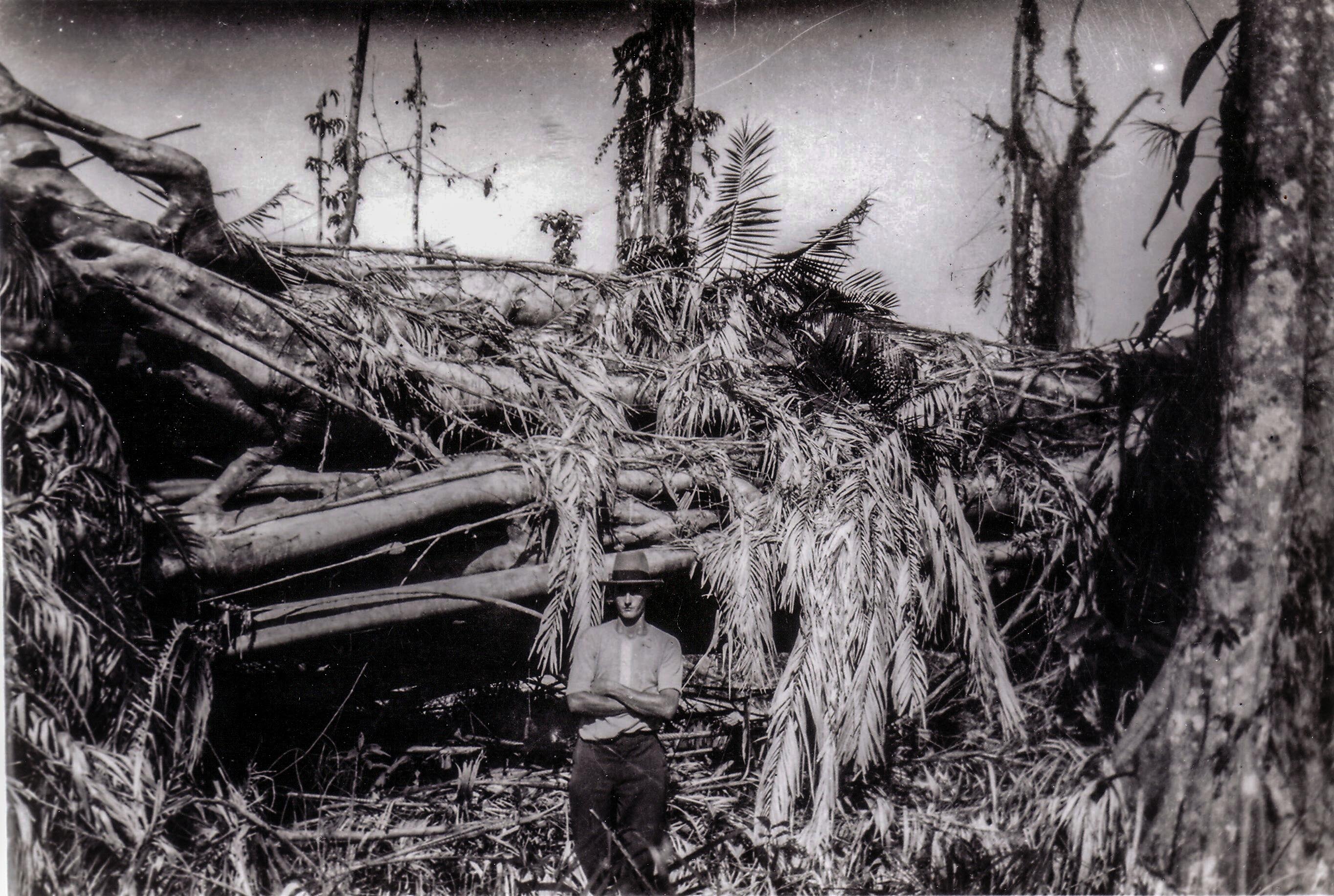 Cane cutters in Tully in the 1920s. Jack Kelleher is to the right and George Hinkler, brother of the famous aviator Bert Hinkler, to his left in shadow. 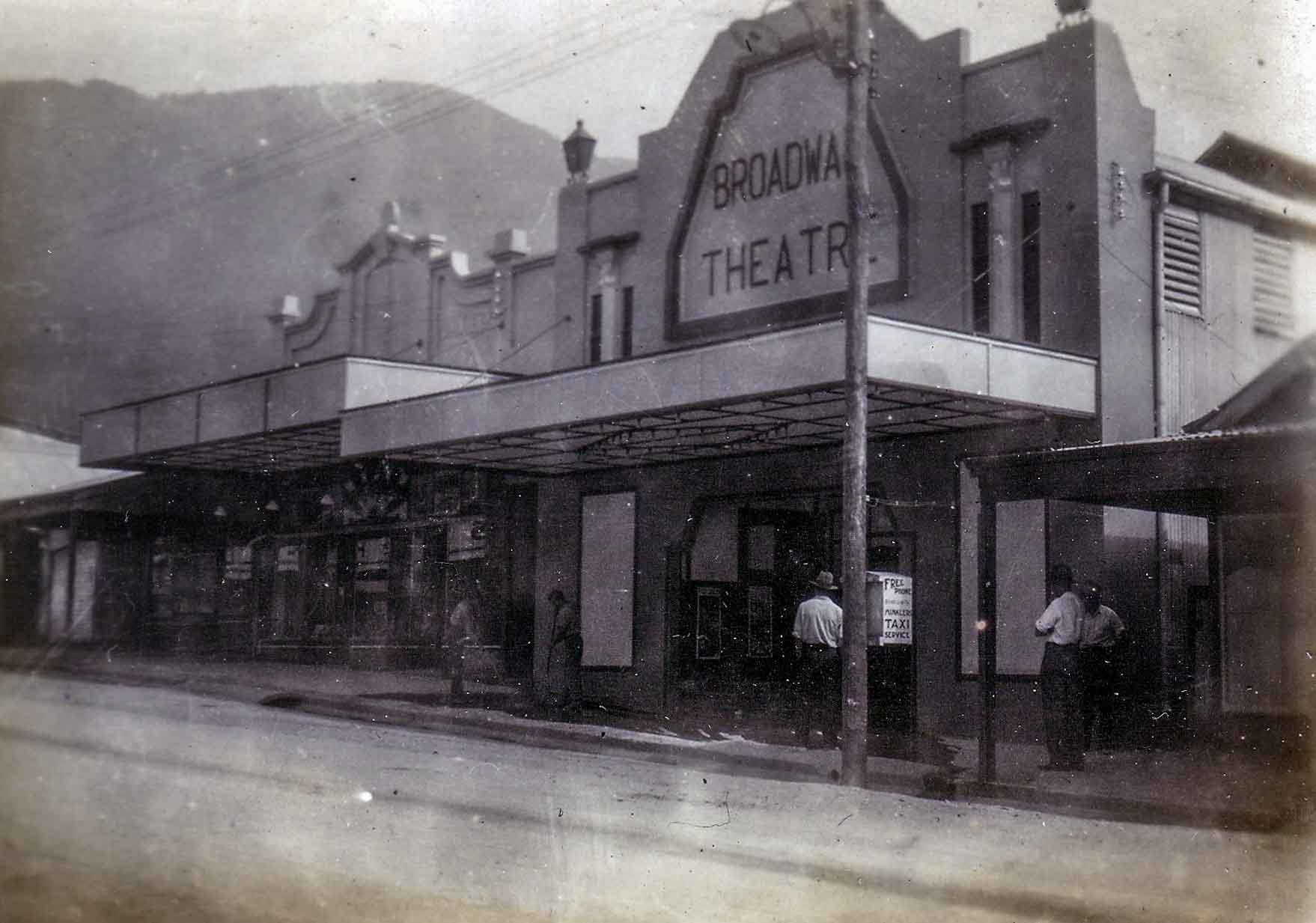 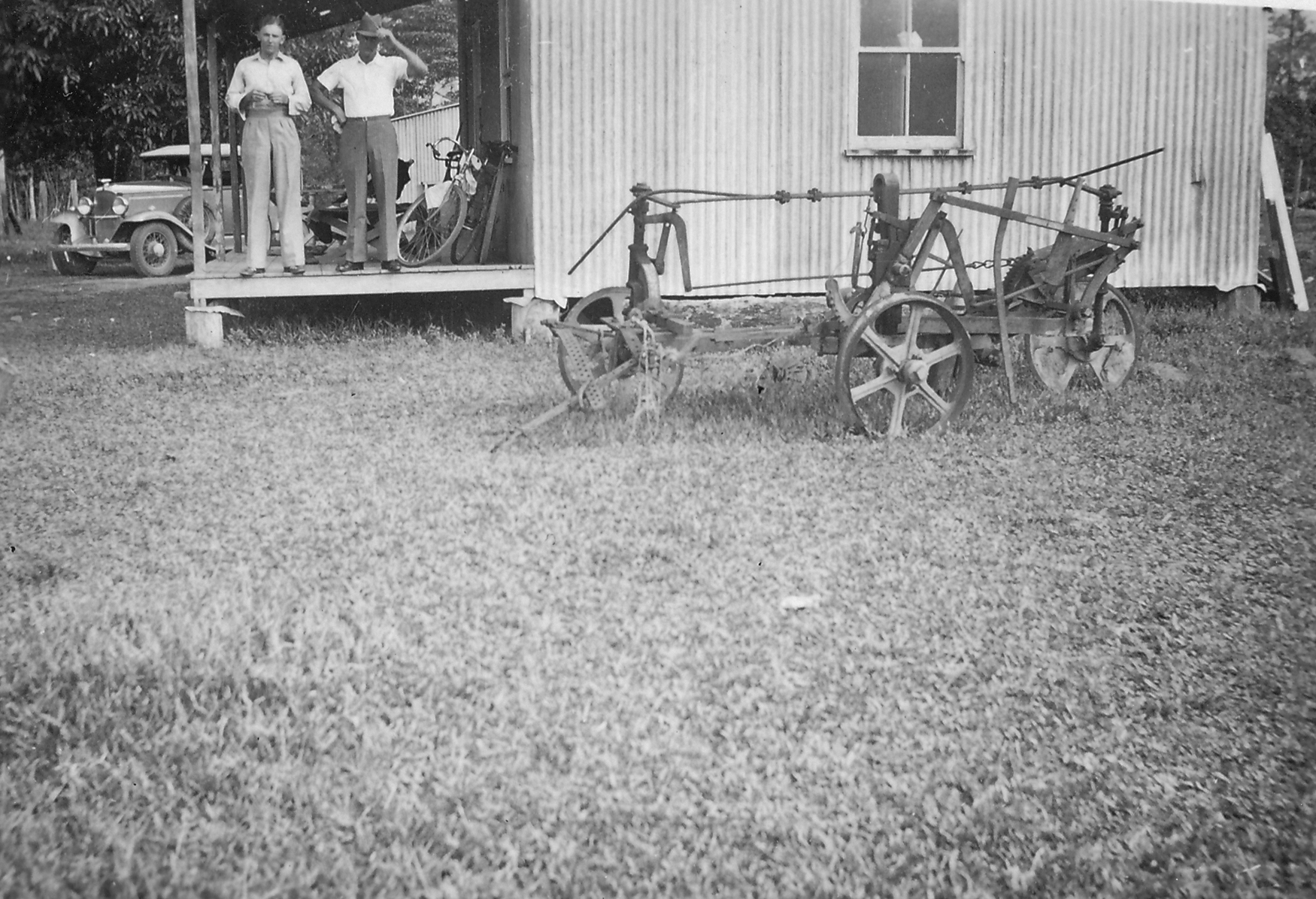 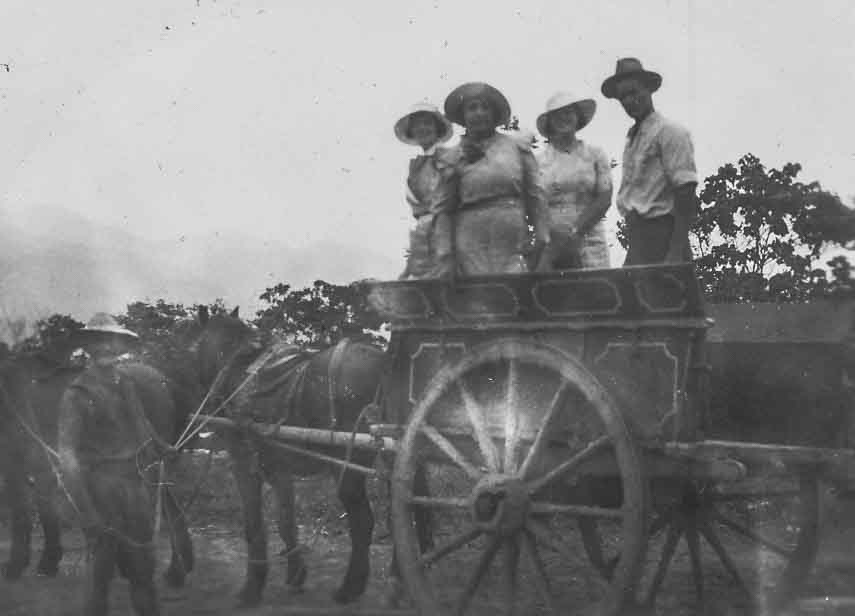 Farm transportation, probably in the 1930s. Jack to the right.

Jack moved back to Brisbane around around 1949 and married Alma Campbell in 1950. They initially ran some businesses in Brisbane before moving in 1952 to the Gold Coast. Jack purchased, sub-divided and sold a large slab of land at Mermaid Beach. He built a small real estate agency at Mermaid Beach adjacent to the pacific highway which stood alone for many years, with development eventually removing its isolation. He named Mermaid Avenue. The family was later to move back to Brisbane. Family home being moved from Trickett Street, Surfers Paradise, after it was sold by the Kellehers.