John James Kelleher was awarded the Military Medal for conspicuous bravery just before he was discharged in October 1919. 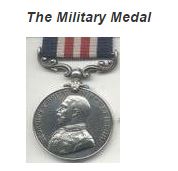 John James Kelleher was born on 21 August 1887 in Ipswich.

He enlisted From Townsville on 19 October 1916 and his papers showed that he was an accountant, 28 years old, 5 feet 7 1/2 inches with blue eyes and brown hair.

He was at the 11th Depot Battalion as a private from November to January 1917. He was shown as a gunner after that time, leaving Australia from Melbourne on 21 June 1917 aboard the HMAT Suevic. He was part of the monthly reinforcements of the to the First Field Artillery Brigade.

His records are sketchy but he was in France from the beginning of October 1917. He marched into Rouelles on 13 October and appears to have been in Belgium later that month. He was promoted to Bombardier in February 1919, the equivalent of a corporal. He returned to Australia aboard the troopship Ormonde on 30 June 1919. He was discharged on the 19 October 1919 in Brisbane.

There is some confusion around his Military Medal because the Citation relates to John James Killop who was also serving in the Artillery and who was subsequently also a awarded a Military Medal. It could simply be that the citation was lost or mislabelled but it is interesting to read the Killop and Warren citation as it illustrates the extra-ordinary courage that must have been exhibited by many on the battlefield, whether or not it was recognised.

For conspicuous gallantry and devotion to duty during the attack on the enemy positions at Jeancourt on the morning of 3 October 1918.

Gunners Killip and Warren laid and maintained telephone communication between Battalion and Artillery Brigade Headquarters. Early in the attack the line was severed by enemy bombardment; they immediately went out and repaired same so expeditiously, notwithstanding the continuous shell fire, that the Artillery Liaison Officer at Battalion Headquarters was able to transmit important information to Artillery-Brigade Headquarters practically without interruption.
Their difficulties were accentuated by their having to pass through a valley which had been heavily drenched with mustard gas.

The attack at Jeancourt, in which Kelleher was awarded his medal, was the final conclusion to very successful series of Australian attacks on the German Hindenburg Line of fortifications. The Australians fought their last action in France on 5 October 1918. 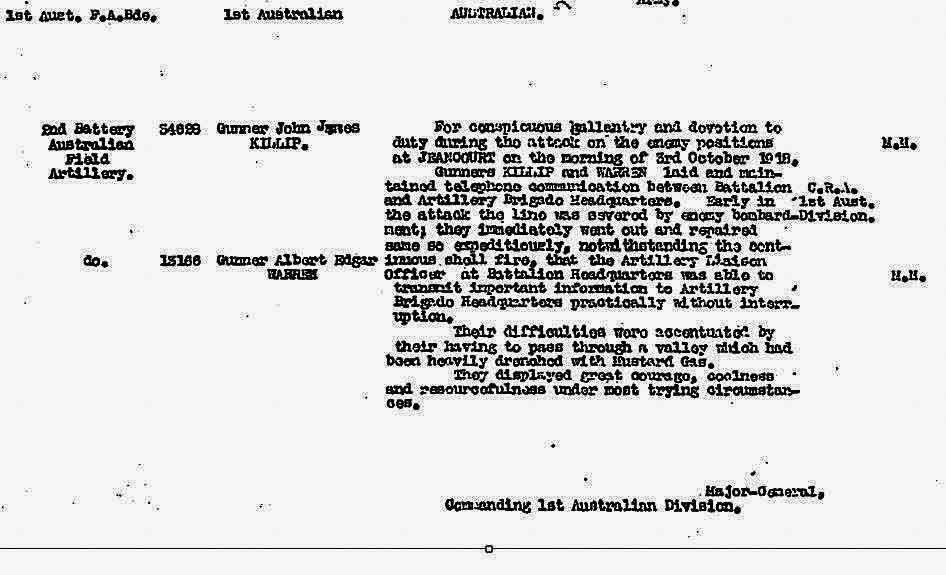 John Kelleher life was not to have a happy ending. He was found guilty on 17 November 1931 of stealing £4466/6/- as a servant from Bartlams Limited. John Kelleher has been the manager of Bartlams whose duties included the collection of accounts from the Cairns branch, the handling of the credit accounts of the Townsville and Charters Towers branches and the writing up of the account books. He kept the books under his control and would not relinquish the responsibility to his subordinate. However, in September, 1927, his subordinate sought to balance the books but found that they were short by £4466/6/-. The Auditor eventually confirmed the loss and Kelleher’s services were terminated in July 1930.

“John James Kelleher, it is rather hard on me to have to impose a sentence on you because, as you know well, we have known one another for about 26 years. I must however, treat you as a stranger. You have been found guilty, and rightly so, of a serious offence, and must be punished, not only for your own sake, but as an example to others, I will say nothing about that offence, but this: When that sentence is expiated, I shall forget it and remember nothing but good. You are sentenced to three years imprisonment with hard labour.”. This suggested that he had been regarded as a valuable member of the Townsville society.

He died on 27 October 1955 at the Benevolent Home in Cheltenham, Melbourne, Vicotria. He must have died intestate and alone because the Victorian Office of the Public Trustee wrote to the army in July 1955 seeking next of kin. They noted that Mary Pease nee Kelleher was listed as next of kin but she had died in 1921.