The Vigor Family Lineage has been traced to the 1600s.

There have been two known migrations to Australia.

His grandnephew, Thomas Vigor, migrated to Australia in 1909. Thomas Vigor was born in 1883 at Brightling, East Sussex, a parish and village, some 5 Miles North West of Battle.

Thomas was the son of Albert Vigor and Sarah Martin. Albert was born on Browns Oak Farm, Brightling, Burwash, England, which is around 8 miles North of Battle. He was said to have left home at the age of ten and worked on a farm, possibly at Burwash where there were butcher relatives.He was described as a tallish man with a very amiable nature. He often went shooting for rabbits and birds at Church-in-the-wood. 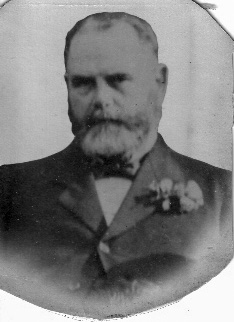 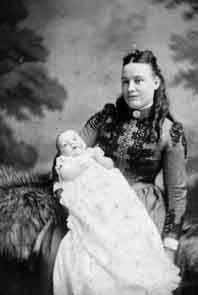 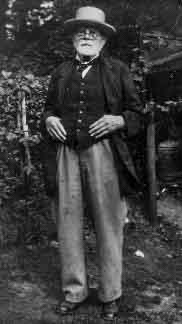 The Vigor store in England with Albert Vigor standing outside. Albert was born on Browns Oak Farm, Brightling, Burwash, England, which is around 8 miles North of Battle.

Albert was said to have left home at the age of ten and worked on a farm, possibly at Burwash where there were butcher relatives. He was described as a tallish man with an amiable nature. He often went shooting for rabbits and birds at Church-in-the-wood and was said to be a crack shot.

He apparently had a secret peephole to observe customers. 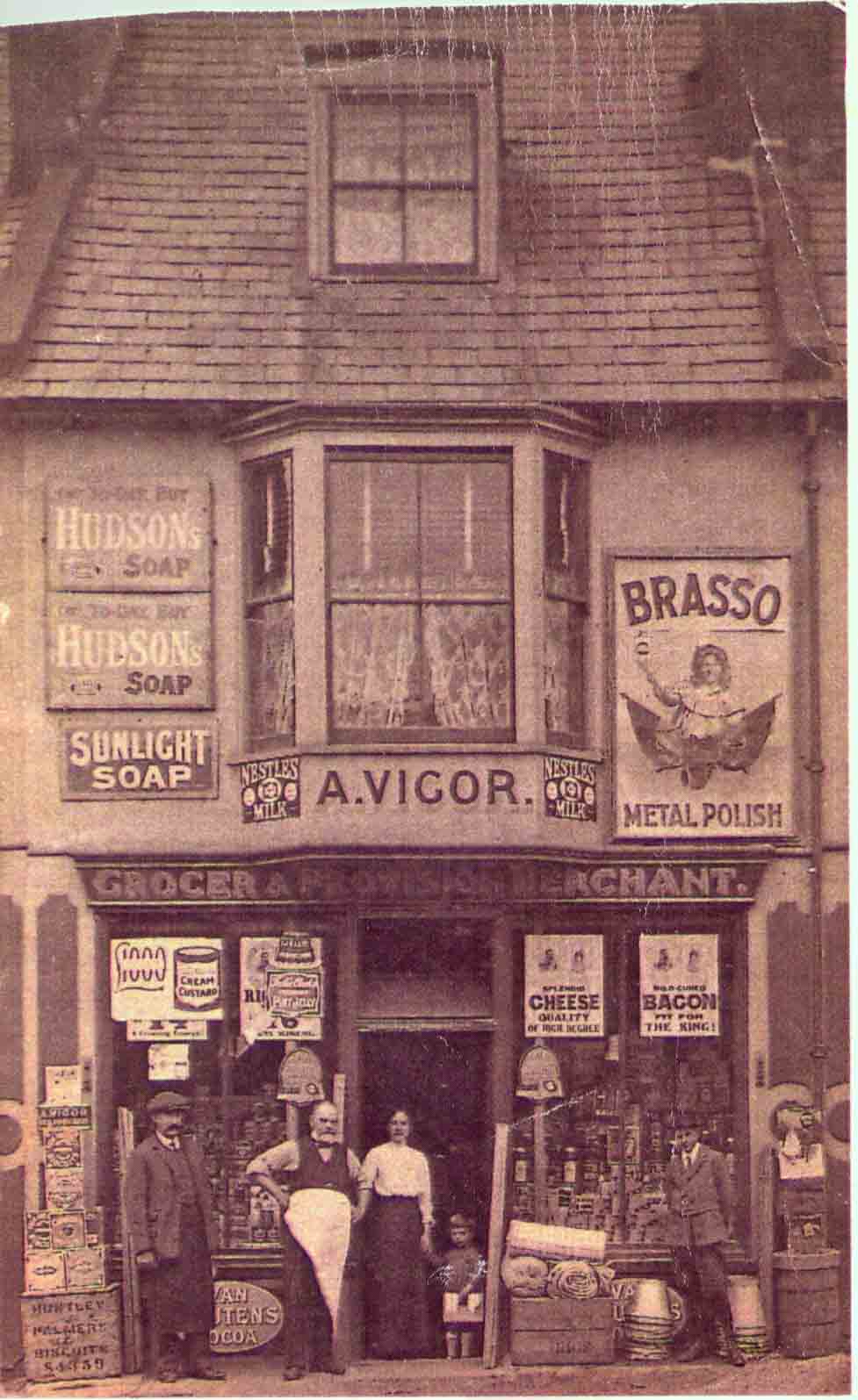 In June 1909, Thomas Vigor and his brother Jack paid 36 pounds for two berths aboard the Carpentaria and migrated to Australia.

Thomas Vigor was soon in Millaa Millaa, a district on the Atherton tableland. He joined a surveyor’s gang which commenced operations in 1909. Prior to this time few white men had penetrated the dense rain forest. The rain forest aborigines were said to have been small in stature, few in number and to have co-existed well with the early settlers. By 1913, the population of the Millaa District was around 100 of which only 6 were women. The early settlers started taking up land in the year s 1910-1911 and Thomas Vigor was shown as part of the Millaa progress Society in 1912. 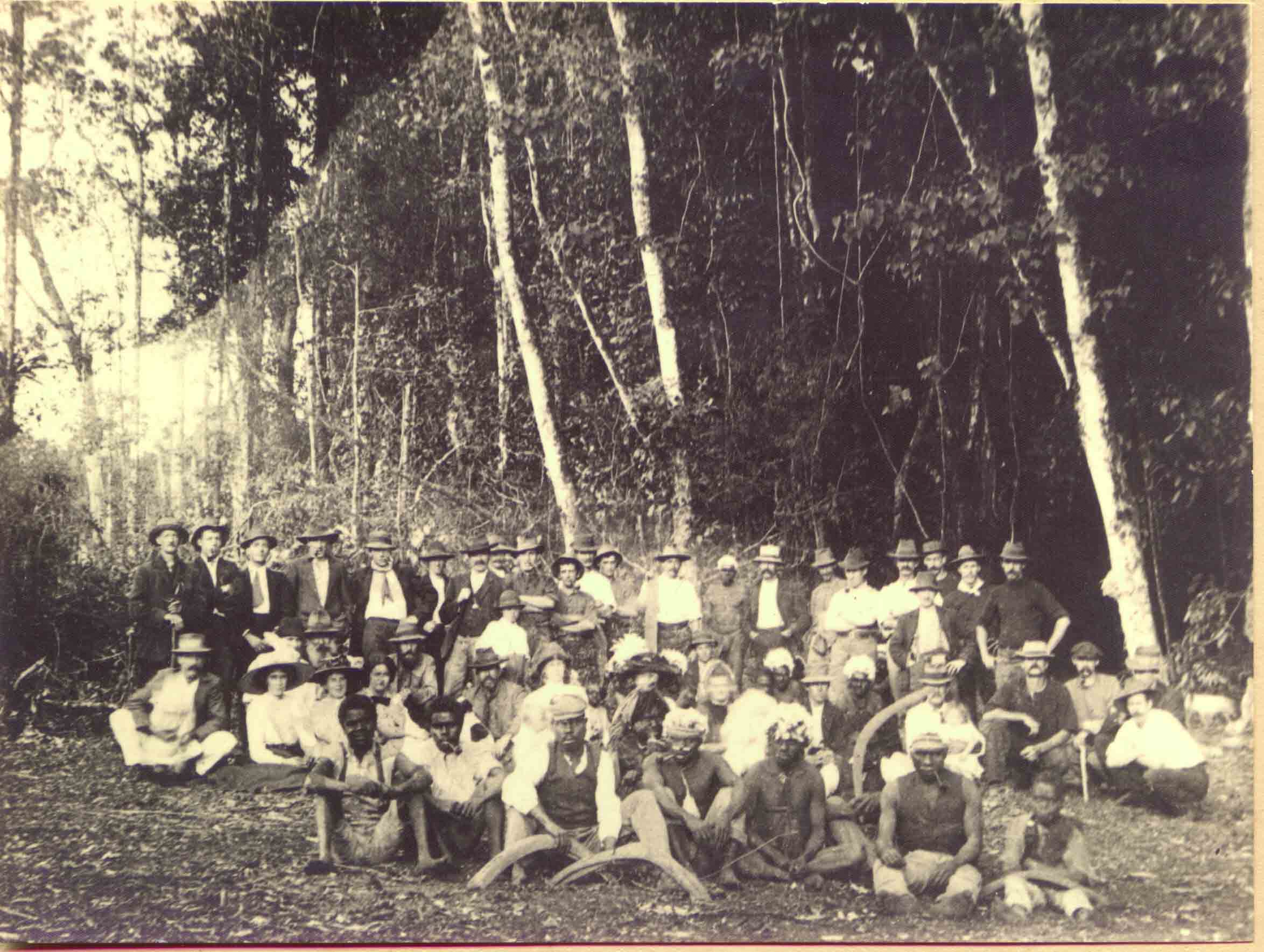 The following obituary for Albert Vigor was published on 24 November 1942:

Many friends will learn with regret that Hollington’s Grand Old Man, Mr Albert Vigor, of 212 Battle-road, died on Tuesday last week after a long illness. Mr Vigor who had passed his ninetieth birthday, came from Burwash 70 years ago, and started in business in Wellington. He was a staunch and active conservative, and an ardent supporter of Tariff Reform. He may be termed the opposite number of another Hollington resident, the late Mr Toby King. In the days of the old Boards of Guardians, Mr Vigor was overseer of the parish of Hollington, and in his younger days was a keen sportsman and a good shot. He will be greatly missed in the district. He leaves a widow and a family of nine, of whom two sons are in Australia and one in Africa. The funeral was on Wednesday at Hollington Church-in-the-Wood, the Rev. A.B. Taylor officiating. The chief mourners were Mrs A. Bray, Mrs G. Barnes (daughters) Mr. Edward Vigor (son) and Mr. George Vigor (son), Mrs R Broadhurst (daughter), Mrs. A. Dawson (daughter), Gwen and Irene (grand-children). The widow and two eldest daughters were unable to attend because of indisposition. Among the friends who attended were Mr G Carden and Mr E Clement. Many floral tributes were sent. Sincere thanks for kind expressions of sympathy and flowers sent. The funeral directors were Messrs Douglas C Mercer and Son, 29 Sedlescombe-road North, Silverhill.

The obituary for Sarah Martin, who died in 1951, was as follows:

Mrs Sally Vigor, of Selsey House, 212 Battle-road, Hollington, who died on Tuesday last week at the age of 92, was born at Ashburnham and came to Hollington 70 years ago. She was the widow of Mr. Albert Vigor, who died nearly nine years ago at the age of 90.

Mrs Vigor carried on business with her husband at Hollington for many years and both were held in high esteem by their many friends. Mrs. Vigor leave nine sons and daughters, 25 grandchildren and 21 great grandchildren. One of her sons recently flew from Australia to see her.

The funeral was on Saturday at Hollington Church-in-the-wood, the Rev. J. P. Hart (rector) officiating. The mourners included Me E. Vigor, Mr R. H. Vigor, Mr G. Vigor, Mr. and Mrs. N. Vigor, and Mrs Stovell, Mrs B. F. Barnes and Mrs Broadbent we re indisposed. Flowers were from Edward, Bert and Irene; Rose and Lily; Tom, Jack, Beatrice and Bob; Alma, Dick and Patricia; Gwen, Don and Graham; Betty, Norman and Mr. and Mrs. Martin; Elsie and Sid; Mr J. Oliver; Mr and Mrs Trailing; Mr. and Mrs. Wallace; Mrs . Walker. The family desire to express their sincere thanks for flowers and kind expressions of sympathy received. The arrangements were by Douglas C. Mercer an Son. 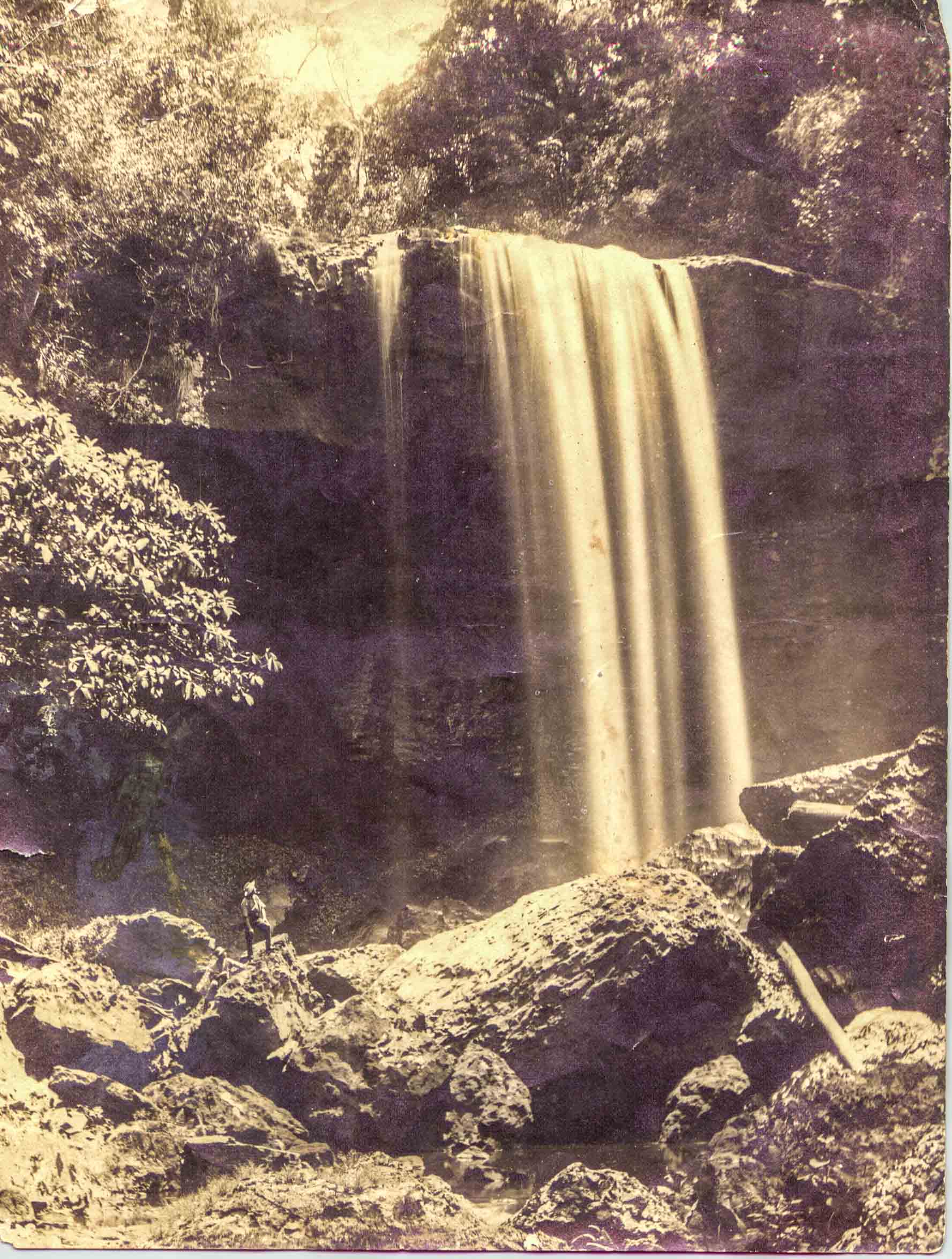 Taken in 1909, the surveyor are sitting with aborginal elders in Milla Milla with Tom Vigor in the centre back with hat,

1911 – Tom Vigor at ‘Zilley’s’ Falls (sic) with R. Griffiths seated below him. Taken by Bunker 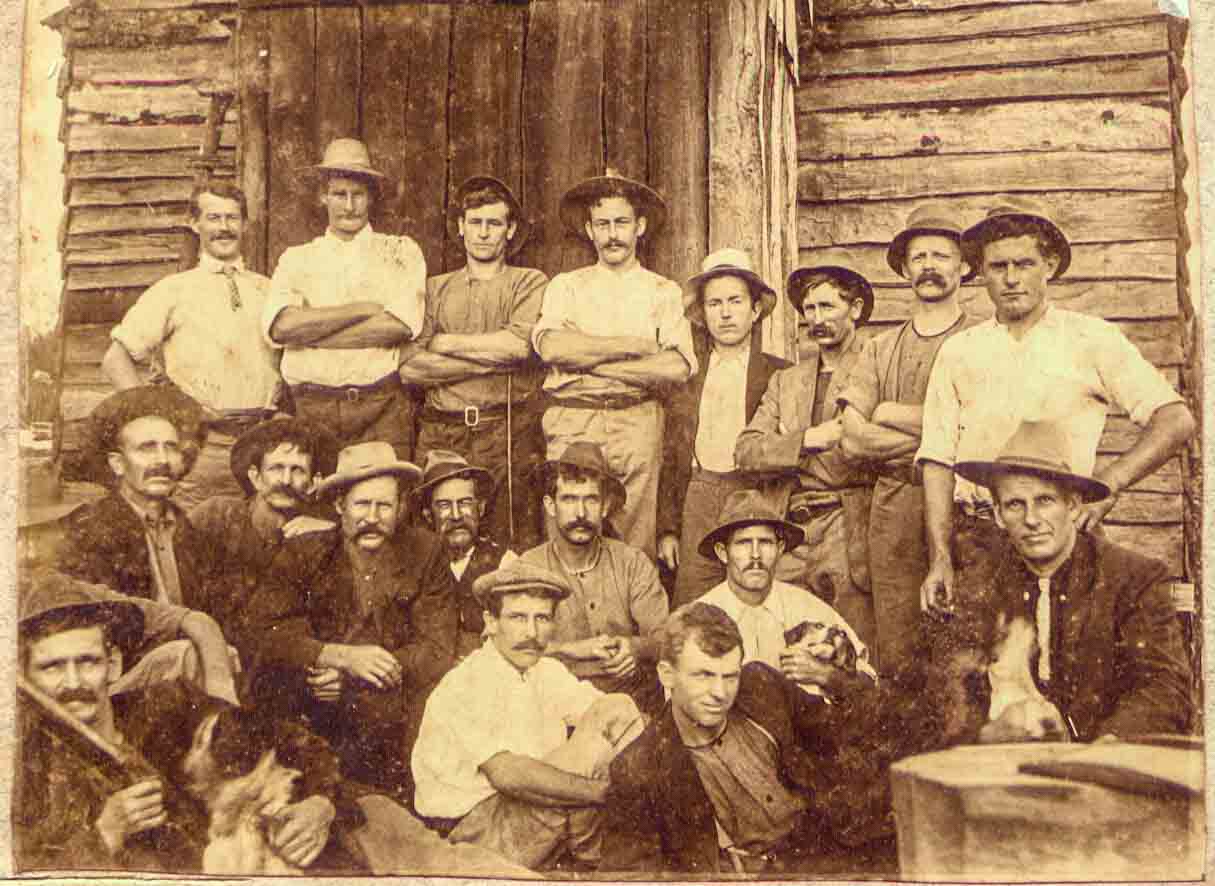 Thomas Vigor moved from the Surveyor gang to his first selection in March 1911, lot 264 bordering Junction and Brookes Roads, very close to the Mungalli Falls. He had a change of heart applying for lot 137 on 30 April 1912 and surrendering lot 264 on the same day. Lot 264 was on Moregatta Road. Thomas married Mary Anne McLeod in 1916 in Herberton, Queensland. She was born in Jarrahdale, Western Australia, to Peter McLeod and Mary Gleeson.

Mary Anne McLeod was the daughter of Peter McLeod and Mary Ann Gleeson. Peter McLeod arrived in Rockhampton in Australia around 1887, aged 22, on the on the SS Dorunda. He married married in Rockhampton in 1891. He joined the Queensland Railways in 1892. The family travelled to Western Australia, by vessel, which was said to have left from Rockhampton and arrived in Port Augusta. The family was there by January 1896. While he may have been lured to Western Australia by the prospect of gold, he worked there at least part of the time as a teamster on the telegraph line. family returned to North Queensland in 1898. Mary Anne was 7 months pregnant and perhaps they figured it was time for them to return and give birth in Queensland. However, tragically, they lost twins on their return journey which they completed in July 1898 – the second of the twins deaths being registered in Syndey on the Brisbane leg.

Peter McLeod was said to have earnt a grant of land after driving cattle 1,500 kms from Miles in Queensland to the Atherton Tablelands. It was said that this was a concession for helping to stock North Queensland in its development stage. They had a property at Yungaburra from around 1904 to 1941. They cut the farm out by hand. While the soil was rich, the farm was of the pioneer mould, with a very small house of hand-hewn timber and on which a single farrow plough was used. A cart used to haul produce, observed around 1910 as being the fork of a tree with a box attached. They ran cattle on the property as well. He subsequently went to Tolga to live with his daughter Kate. He died at the age of 80, from a heart condition and was buried in the Atherton cemetery.

Mary Anne Gleeson arrived in Bundaberg, Australia, aboard the Scottish Lassie. She was the daughter of John Gleeson and Mary Cooney. She died as the age of 84.

Taken around 1900 in Western Australia. Peter and Mary McLeod, Christina Mary Anne and Henry. Twins were to tragically die on the ship back to Queensland in 1898. 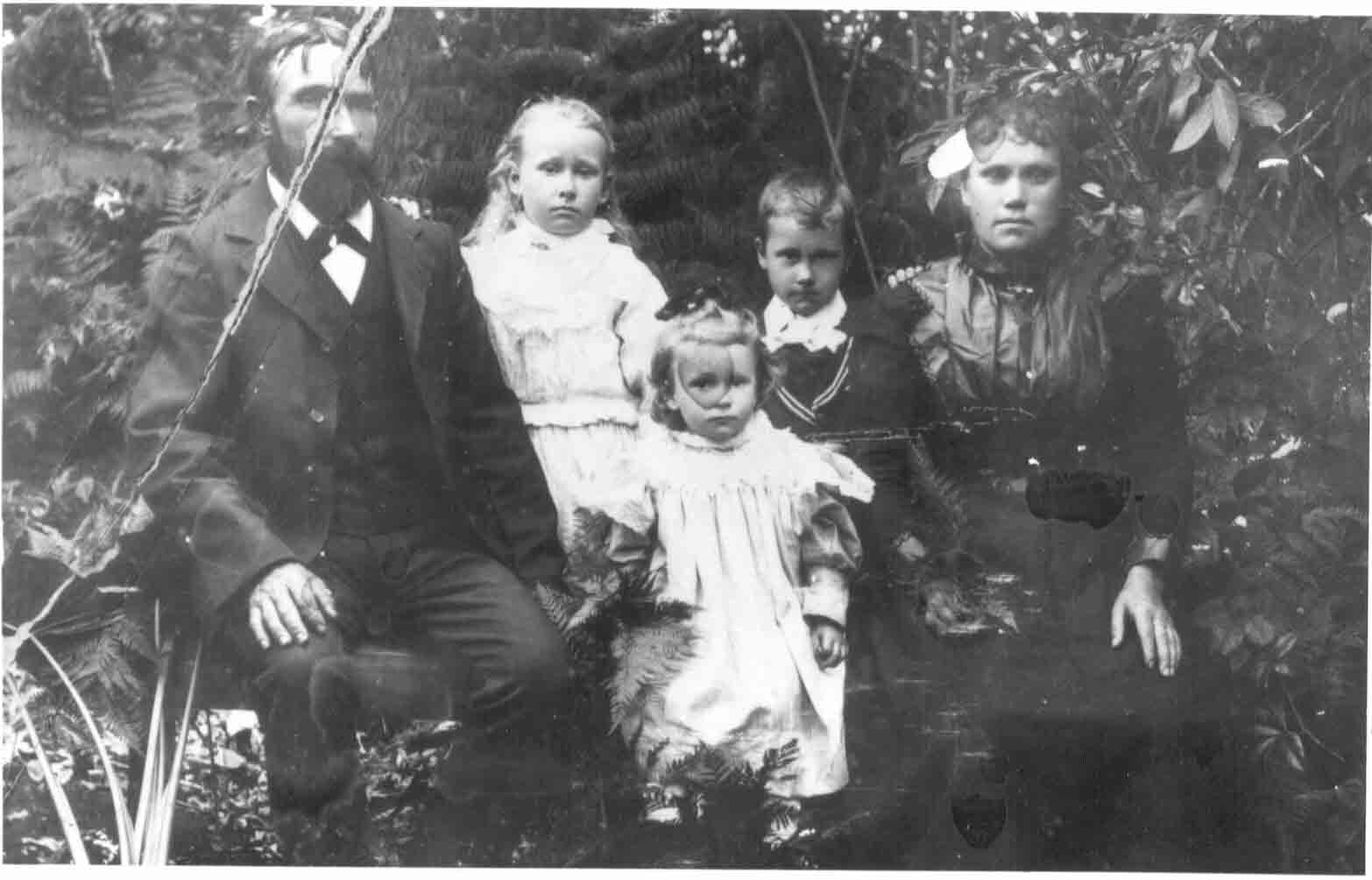 The Vigor farm prospered with the building of an extension to Millaa of the railway, securing a contract for the supply of meat to the railway workers. However, after the completion of the railway extension in December 1921, the farm fared less well and was sold. Thomas Vigor set up a butcher’s shop in Atherton and bought a property at Kulura, which is now covered by the waters of the Tinaroo dam. The Cairns Post reported on 23 May 1923 that:

“On Friday last there arrived in Atherton some heavy machinery for the Main Roads Board operations. A big stone crusher and parts that will take some handling. A lot of their plant is being stored m the Repatriation Office pro tem. In the building world Atherton seems pretty brisk. Mr. Sharples has completed the front of the new Post Office concrete foundations, and all the blocks of the main building are in. The new linesman’s shed is rapidly being completed, and with fine weather things are getting along first-class. A new shop is being fitted up between Little’s office and N. Markham’s, and Tom Vigor is rapidly excavating the ground for his butcher’s shop and cool store. He will erect next to Armstrong’s. The Council have been clearing some of the stumps out of the streets and cleaning some of the trees planted in them.” 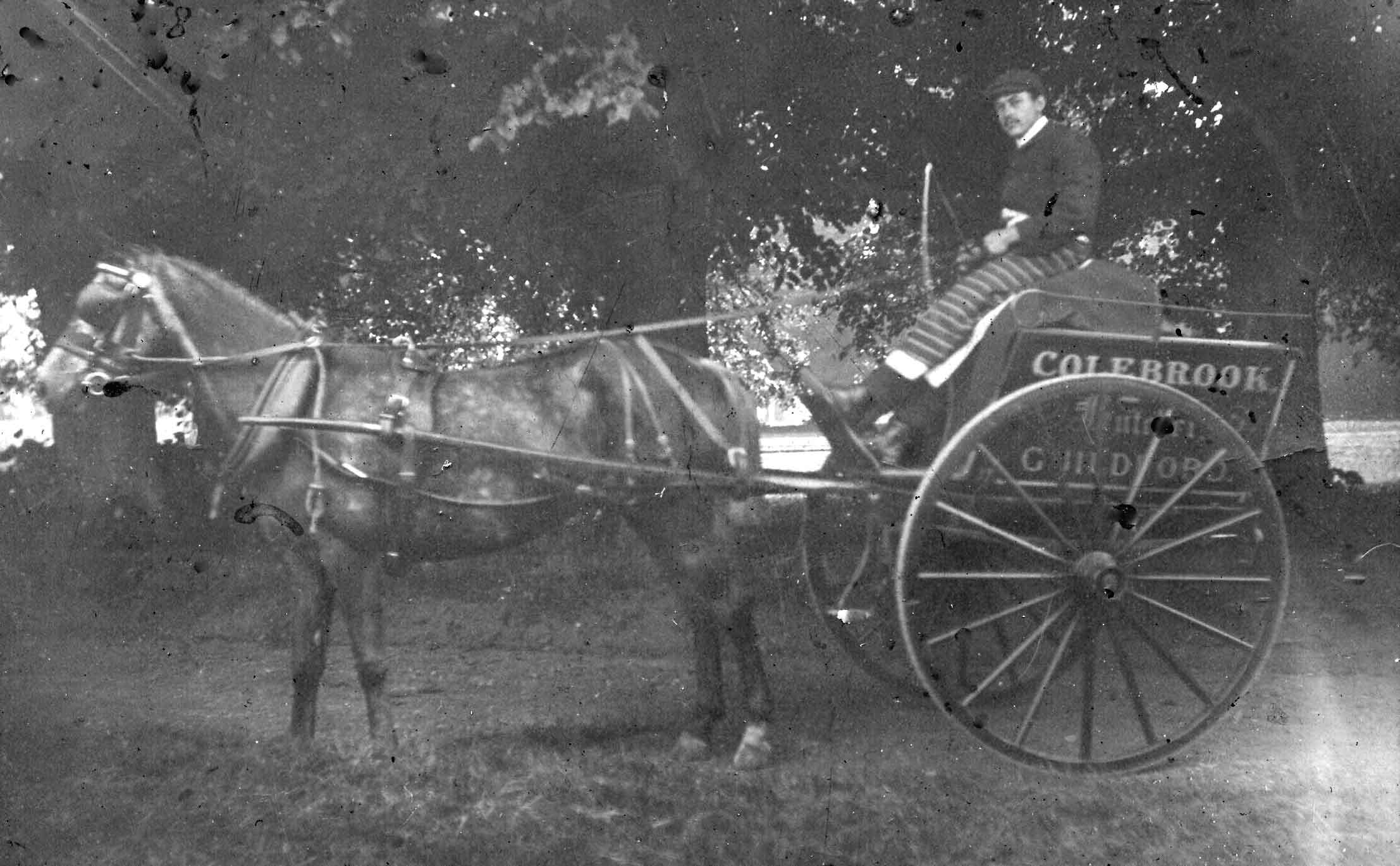 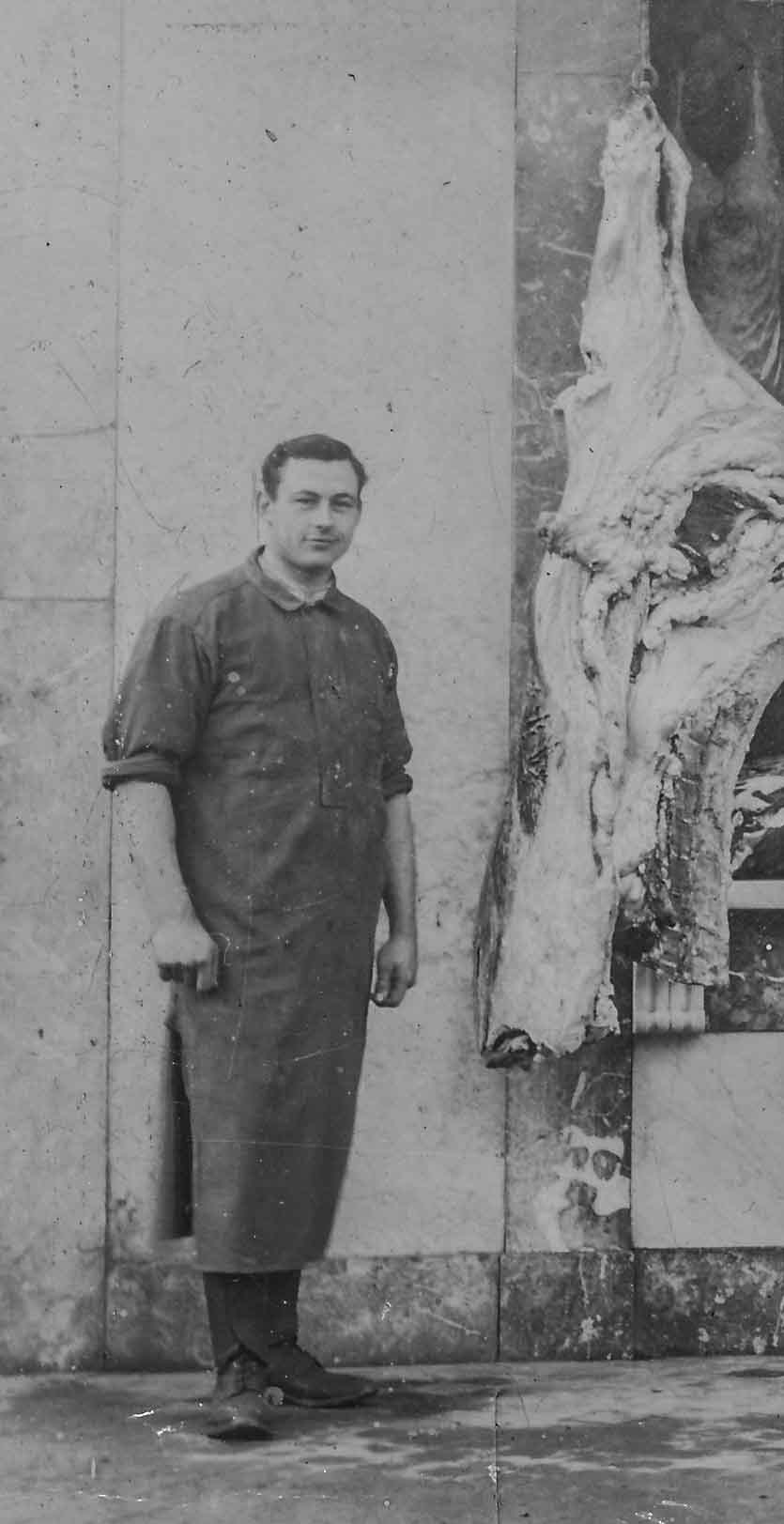 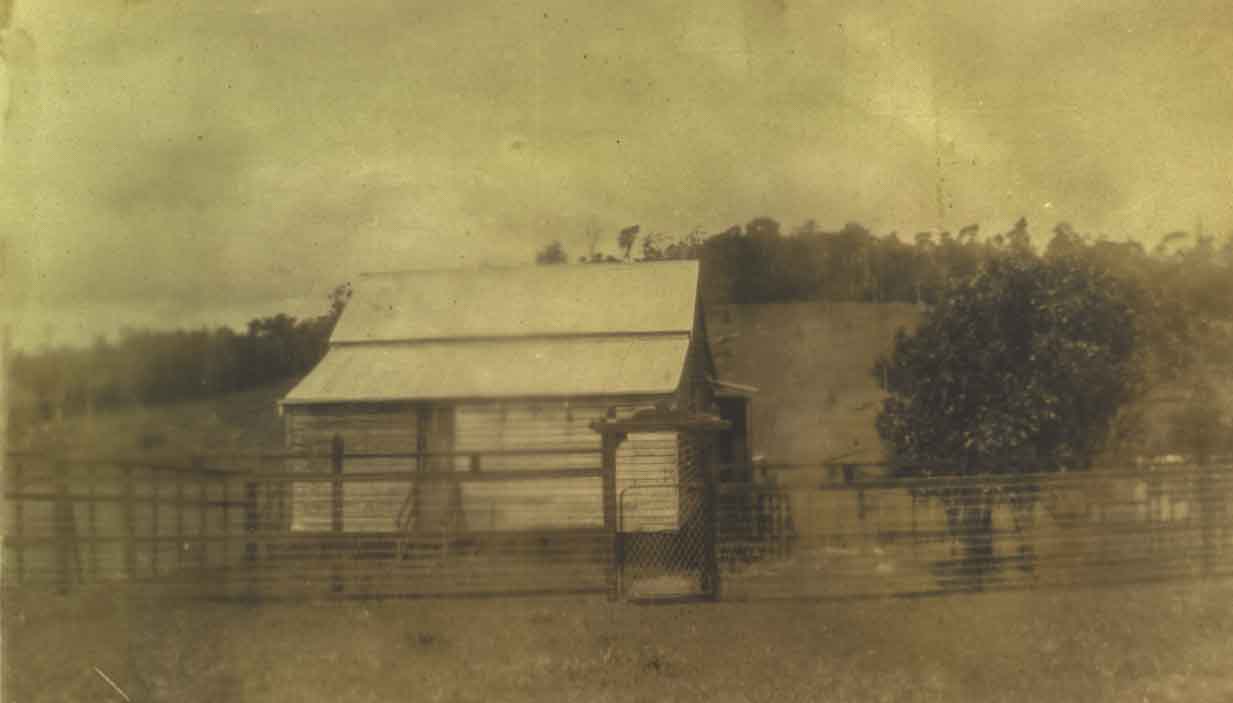 Thomas Vigor in England. His apprenticeship was in the small goods end of butchery more common in England.

Thomas Vigor working at his butchery. It was work very different from this training. He was known for his strength and was could carry half a cow.

Vigor family home in Malanda, Atherton tablelands. It was visited by dingos in the first few nights they were there.

He sold that butchery during the depression in 1927. He later bought a butcher shop at Stratford.

By 1928 the family was in Malanda. Albert, Mary and Beatrice were all enrolled at the Malanda school. The house site appears to have been on the corner of the Thiaki Creek and Millaa Millaa to Atherton roads with the old Vigor Malanda home was 2 miles outside of Malanda on the road to Millaa. On moving to Malanda, Thomas bought a further property which he retained until 1940. They then moved to Cairns. Thomas purchased a butcher shop at Stratford, Cairns but was not able to compete successfully with the established competition. He undertook scrub clearing work at Portland. The Cairns post, reporting on ambulance cases, indicated in September 1942 that he had sustained a severe lacerated wound at the Stratford Mill to the back of his right hand when it was caught on a piece of timber at work and entered the Cairns hospital to recuperate. 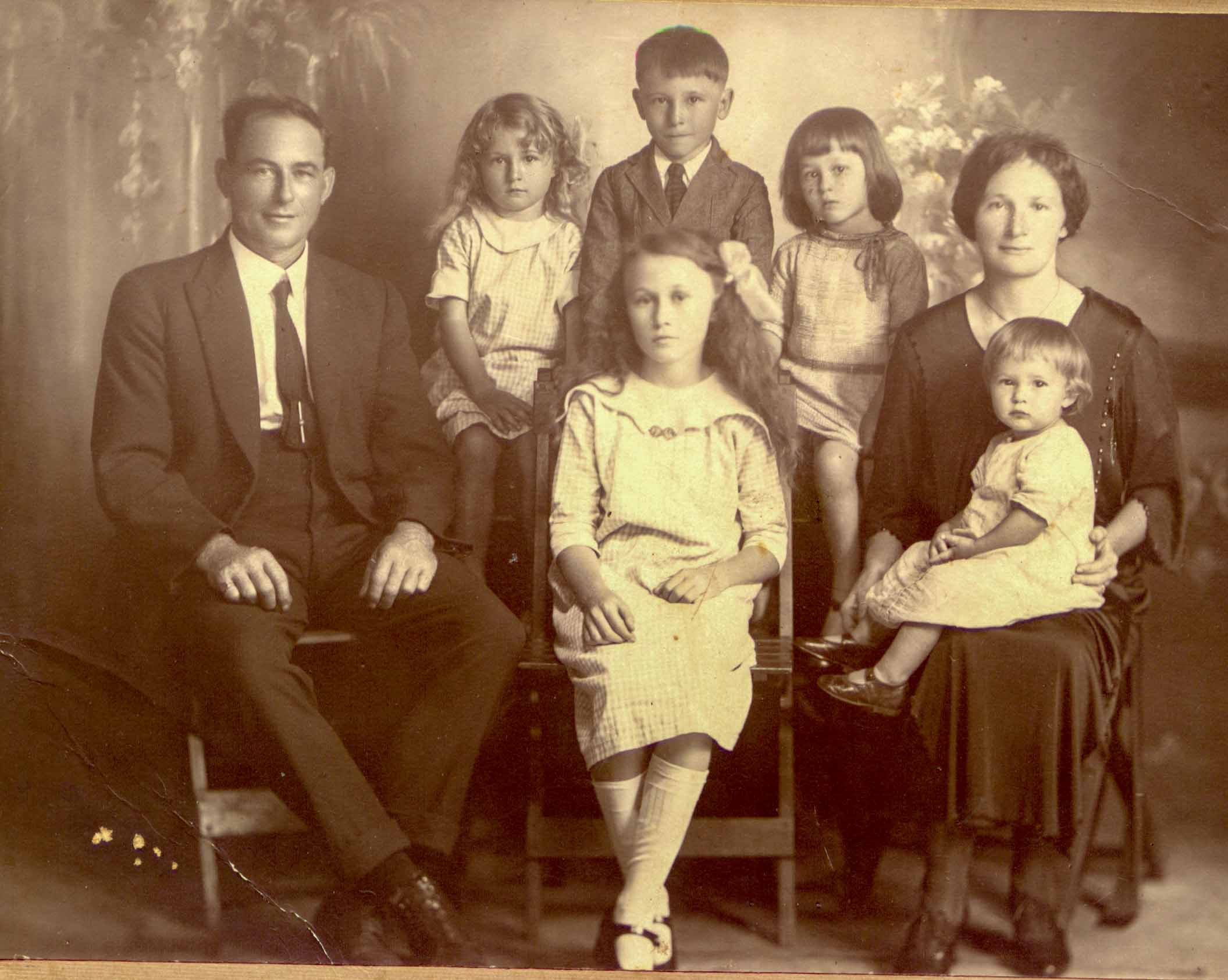 Thomas Vigor died in 1957 and is buried in Cairns. Mary Ann died in Brisbane in 1964. In the next generation, there was a marriage between the Vigors and McMahons.